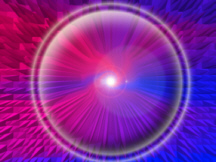 This technique will begin with you generating what is called an energy ball. First, you will need to hold your hands in front of you, while pretending that you are holding a ball, similar to a balloon between them. See this ball clearly in your imagination and feel the imaginary ball as it rests between your hands.

Next you need to place the mental picture of the thing you are wishing to materialize, for example, the five dollars into this energy ball. You can imagine a photograph of the object or the object itself sitting inside the ball. You have now endowed the energy ball with a purpose.

Release the energy ball, with its newly endowed directive, then give it a gentle push outward. If it is done correctly you will feel a slight power drain, as the energy ball leaves. Continue to monitor the energy ball in your imagination. Follow the ball as it enters an energy vortex. You can imagine the vortex as a spiraling mass of energy which surrounds a tiny hole in the center. This hole is where the ball of energy will get sucked into and disappear. After the energy ball gets sucked into the vortex, then you are done. This whole creation exercise should not take more than one minute to accomplish.

There are no upcoming events.